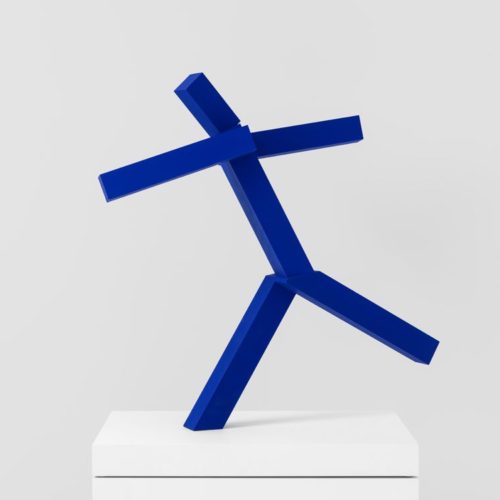 Joel Shapiro is an American sculptor whose diverse body of work in wood and bronze playfully dances the line between the minimal and figurative, subverting the dichotomy between terms like stasis and movement, representation and abstraction. Shapiro’s hard-edged geometric forms often have strong colors and are arranged in bodily configurations—often balanced on a single point—which convey action and tension.

A native of Queens, New York, Shapiro initially pursued a medical degree at New York University until 1965, when he spent two years in Southern India with the Peace Corps. The art, architecture and culture of India captivated Shapiro and inspired him to become an artist. When he returned to America he enrolled in the university’s masters program where he studied contemporary artists such as Carl Andre, Donald Judd, Robert Morris and Richard Serra.

During the 70’s, Shapiro was featured in two solo exhibitions at Paula Cooper gallery where he presented assemblages of found items which were deeply referential to his two years in India—displays of pigment and spices, jewelry, rolls of fabric, and even cured meat and cow dung. By the 1980s, Shapiro began to explore larger sculpted forms that were reminiscent of India in concept rather than material. The work became more figurative, portraying bodies in varying action poses which conveyed as much movement as possible for a still object. Shapiro pushed the limits of sculptural stability, creating pieces which seemed to teeter on the edge of tipping over, despite being strongly grounded with architectural construction techniques.

Shapiro’s later works maintain the action and tension of the figurative works, despite being less representational and at a larger, installation scale. He has been awarded the Skowhegan Medal for Sculpture, a fellowship from the National Endowment for the Arts, and membership in the American Academy of Arts and Letters. The artist also receives frequent commissions to create public sculptures, including works at the United States Holocaust Memorial Museum in Washington, D.C., the Museum of Fine Arts in Boston, and the Israel Museum in Jerusalem, among others. He currently lives and works in New York.