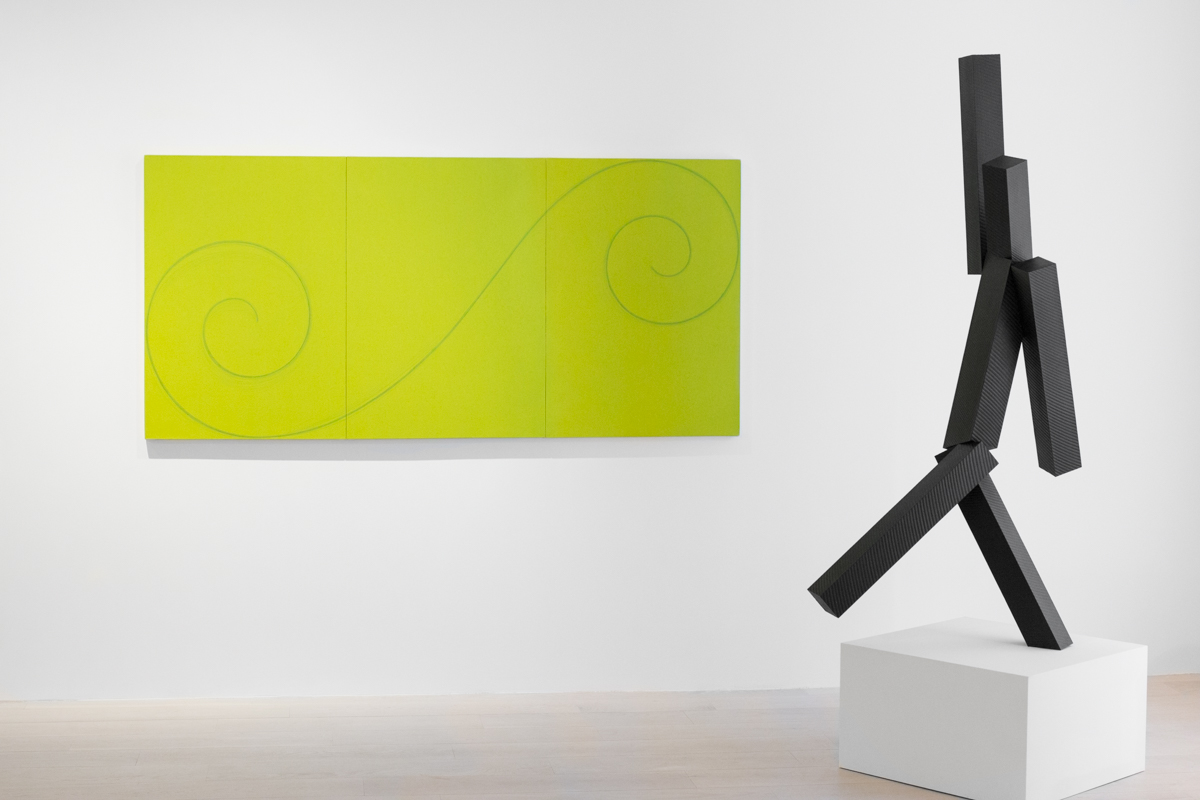 “This flat picture plane, existing before you like a wall, that you could neither enter or treat as an object, is for me painting’s essence”[i]

“My work has to do with the memory of experience. It is an attempt to locate experience in form”[ii]

The reductive geometries explored by Robert Mangold and Joel Shapiro have long aligned them with the Minimalist art movement, yet their respective practices are not strictly exercises in pure formalism. Their intuitive approach to composition and materiality, their distinctive use of color, and their embrace of allegory conveys a Romantic sensibility that humanizes their otherwise angular art. Mangold and Shapiro both emerged as artists in New York in the mid 1960s, when battle lines were drawn between the highly subjective abstraction of the post-war painters, the subject-driven nature of Pop art and the conceptual frameworks proffered by Minimalism. While absorbing the lessons of this fertile time in art history, both artists decided upon an extreme economy of means for their work, inventing new ways to reconnect abstraction to a wider referential sphere.

For Mangold, painting became a kind of medium of investigation. His early work looked to the architectural structures of Barnett Newman and the thin surface treatments of Mark Rothko, while introducing shapes and colors borrowed from the urban world around him. His subsequent restrained paintings – each arrived at through methodical stages of drawing – are stripped of gestural or nuanced brushstrokes, yet they never appear mechanically produced. They typically present fields of muted color built up in thin layers, with hand-drawn lines that form strangely asymmetrical and eccentric compositions. In the case of his multi-panel works, the physical edges of conjoined canvases become integral to the visual structure, establishing a further element for Mangold’s lines to respond to. His canvases are often irregularly shaped or contain apertures, which jolt the viewer into perceiving the scale and spatial aspects of the painting and the context in which it is hung. Each of his paintings possesses a compelling uniqueness and beguiling atmosphere; they are objects that must be encountered and confronted, becoming vehicles for reflection.

While frequently configured from geometric units, Shapiro’s dynamic sculptural forms are intended to communicate something of the artist’s emotional state, or such universally understood sensations as exuberance, suspension, imbalance, and collapse. He has developed a unique style of working in wood and bronze, creating physically energetic sculptures that are unrestricted by the flat planes of floor or wall, or seemingly by gravity. Shapiro’s range of work is diverse, but he is perhaps best known for his freestanding, large-scale figures that appear to be dancing, kicking, running, or falling. They are often colored to heighten their drama with potent force. “The idea of thinking in color always interested me,” Shapiro has stated. “If you are a sculptor and you use color, the color has to mean something, do something to change your perception of the piece.”[iii] The forms that constitute these sculptures are incredibly simple, but they are deeply evocative, eliciting notions of freedom, danger, inhibition, inertia, energy, and a wide range of emotions. Yet as one walks around and interacts with these figures, they are just as likely to disappear into pure abstraction. This shifting quality is indicative of the tensions within Shapiro’s work. There is, too, an inconclusive and anti-hermetic nature to Mangold’s paintings. Both artists prefer to leave things open to the viewer’s perception and speculation. Their particular enquiries into color, form, line, shape, scale, and space, represent the duality of doubt and conviction that drives them, forming a convincing argument for the continued vitality of abstract art.